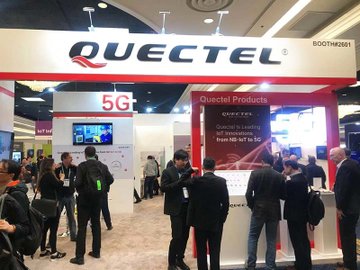 Quectel Wireless launched two “all-in-one” multi-mode LTE Cat 1 modules EG21-G and its Mini PCIe variant at CES 2020. Both modules support global 4G, 3G and 2G radio access on up to 30 bands with a single SKU. This will significantly enhance the efficiency of global IoT deployment and reduce costs.

Based on Qualcomm’s MDM9x07 modem, the two Cat 1 modules are compliant with 3GPP Rel. 11 specifications and deliver maximum data rates of 10Mbps downlink and 5Mbps uplink. Both are ideal to diversified IoT applications, which require medium data rates and stable connections, such as smart metering, wearable devices, environmental monitoring, security and alarm systems.

Offering up to 30 bands allows IoT integrators and developers to operate their devices on the networks of major global carriers, which include but are not limited to AT&T, Verizon and Deutsche Telekom. Both modules support a multi-carrier switch by detecting (U)SIM cards.

“We are glad to introduce the new EG21-G series of modules for global customers, an important addition to our best-selling LTE standard module family,” said Delbert Sun, vice general manager of Quectel. “The modules’‘all-in-one’ feature allow customers to deploy their IoT devices globally with a single hardware design. This will significantly simplify design and testing, and save distribution costs for those partners expecting to tap global businesses.”