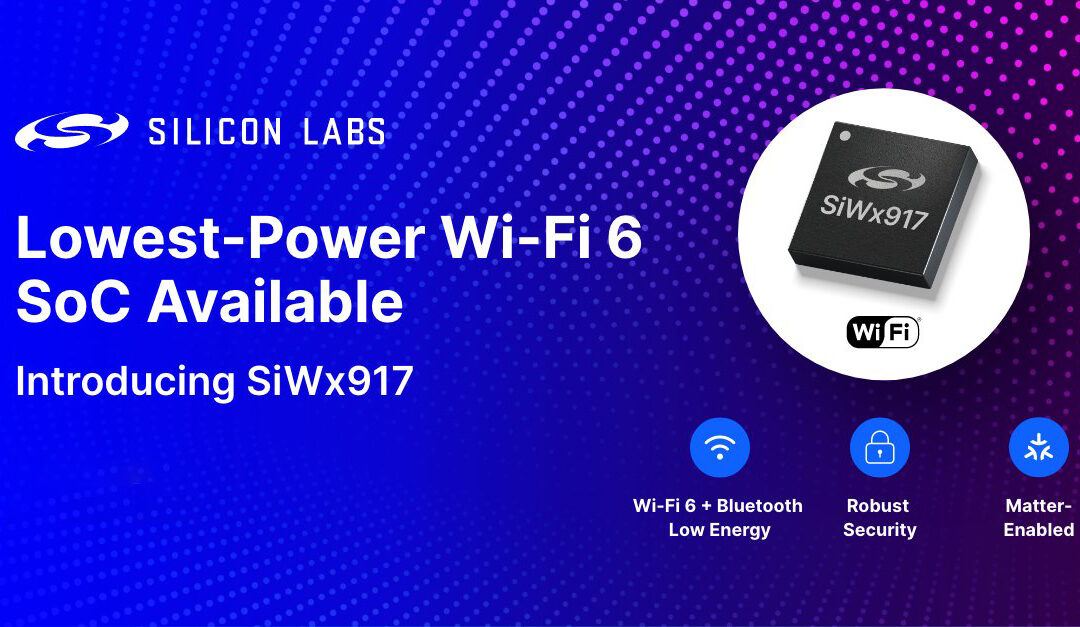 Wi-Fi continues to be one of the most used and well-known connectivity standards in the IoT. It is exceedingly popular amongst consumers, and industry estimates say there will be 18 billion Wi-Fi-connected devices in circulation by the end of the year.

This represents a massive market for designers and developers, but as the IoT continues to take root in people’s lives, it also offers new requirements and expectations from device users. Users are becoming interested in new IoT use cases that extend audio, visual, and data processing applications that drive advanced functions to battery-powered devices, like smart door locks, cameras, sensors, and cleaning robots that can navigate around obstacles in a home. This means that energy use and power consumption must be considered as an increasing part of the end-device development equation. In addition, with most existing Wi-Fi devices using the 2.4 GHz spectrum, the network is becoming crowded with devices that reduce performance in high-density areas. Finally, users are also looking to consolidate and be able to control all of their devices from one hub, ideally a single app, phone, tablet or console, so the next-generation of Wi-Fi devices must also be future-proofed for Matter. Wi-Fi 6 helps address these challenges with new features such as OFDMA, MU-MIMO, beamforming, BSS coloring, and Target Wake Time, to name a few.

Today we are announcing the ultra-low power SiWx917 Wi-Fi 6 and Bluetooth Low Energy (LE) SoC. SiWx917 was developed to radically reduce the energy consumption in Wi-Fi IoT networking, while delivering more compute, faster AI/ML, and robust security to solve the challenges of the future. We wanted to give device makers a single, fully integrated, and Matter-ready Wi-Fi 6 SoC with high memory capacity and the longest battery life in the segment to run all wireless stacks and customers’ applications on the same chip to reduce cost, simplify development and accelerate time to revenue.

The SiWx917 is the first Wi-Fi 6 SoC in the Silicon Labs portfolio. The SiWx917 supports OFDMA, MU-MIMO, BSS coloring, and other features that enable higher bandwidth and improved network efficiency in crowded environments, which allows for faster, more stable network coverage. With its ultra-low power capability and support for Wi-Fi 6’s Target Wake Time, allowing devices to sleep for longer periods, it can enable multi-year operation for battery-based designs such as smart locks or smart sensors. With Bluetooth LE in the same chip, the SiWx917 also supports simple device commissioning that can significantly reduce the time it takes to deploy new devices, at home or in commercial and industrial environments where the devices can number in the thousands.

The SiWx917 also supports Matter over Wi-Fi in a single-chip package. This helps developers simplify their designs by using a smaller form factor, reduce development costs, and allows for faster time to market, while also meeting the demand from users to control their entire IoT environment from a single application or device.

While Matter has the potential to usher in a new era of IoT connectivity, but a multitude of devices being connected to a single access point, security becomes even more important. The SiWx917 is PSA Level 2 certifiable, with Secure Boot, Secure Trust Zone, Secure XIP, and more to protect devices, customers, and the brand reputation of device vendors from the increasing landscape of cyber attacks.

All of this comes together in an extremely energy efficient SoC with ultra-low power capability that delivers up to 50% lower power consumption than competing Wi-Fi 6 and Bluetooth LE combination SoCs, making it ideal for low-power IoT designs, especially battery-based designs.

The SiWx917 is sampling now, with general availability planned for early Q3 2023. If you’re interested in learning more about the SiWx917, visit: